What is the Cauldron? 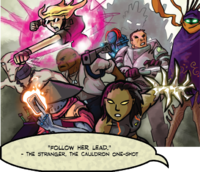 The Cauldron is a custom fan expansion for the Sentinels of the Multiverse cooperative card game by Greater Than Games. They were designed for the 2011 (Enhanced Edition) version of the game; they are not intended to be compatible with the 2021 Definitive Edition.

This site contains all the images which comprise the Cauldron fan expansion. You are free to use them as long as you respect the artist's copyright and do not sell any of these works. The images themselves are all stored in Google Drive.

Info on purchasing the Cauldron

Background info on each deck can be found under Decks; the rest can be found in the card images themselves. There's also a Cauldron AMA from December 2018 (compiled version here).

A handful of unexpected decks and promos were added in 2020, just for fun.

Most of these decks have been heavily improved by feedback from the BGG Sentinels Variants forum.

All art by Matthew Bishop. The official Sentinels of the Multiverse characters belong to Greater Than Games, the rest (with the exception of Magnificent Mara) belong to Matthew.

If you enjoy the Cauldron (the art in particular), consider checking out Atma: A Roleplaying Card Game by Matthew and his brother, funded via Kickstarter and now available!

The best place to ask questions is the Cauldron thread on BoardGameGeek.

All content on this site copyright (c) 2021 Matthew Bishop.